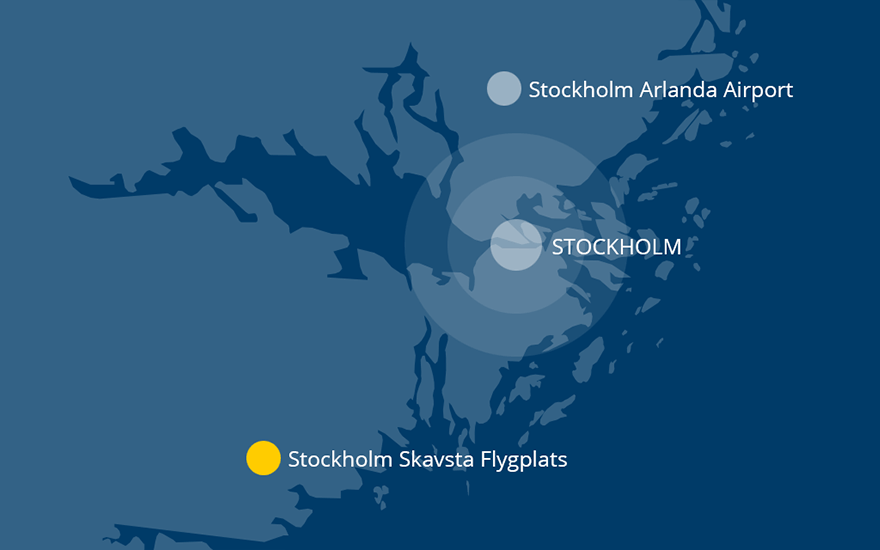 With over 2 million passengers yearly, Stockholm Skavsta is ranked 3rd in Sweden on international traffic. When domestic traffic is counted, SSF is the fourth busiest airport in Sweden. The commercial traffic consists exclusively of regular international flights within Europe. In autumn 2018, more than 40 European destinations can be reached.

In other words, Stockholm Skavsta is a gateway to international business and markets regardless of whether it is the point of origin or point of destination.

Stockholm Skavsta is one of Sweden’s core airports in the trans-European transport network (TEN-T). The European Union is co-financing the upgrade to all-weather landing technology which will be in use by 2019. By increasing the accessibility to Stockholm Skavsta Airport and consolidating the provision of air navigation services, the robustness of the aviation infrastructure in the greater Stockholm area will be enhanced.

The airport has permission to expand with another four million passengers (which equals traffic at Gothenburg Landvetter). With capacity for trans-Atlantic jumbo jet freighters the owner´s aim to provide a full aeronautical and commercial product range is only a matter of time.

Home base for Swedish Coast Guards

The airport is open 24/7 which is why the Swedish Coast Guards, responsible for maritime surveillance, has chosen Stockholm Skavsta as its´ home base. Surveillance is conducted along the Swedish coast and over the large lakes Vänern and Mälaren, around the clock, every day of the year. In addition to this surveillance, there are regular international assignments. The Coast Guard Air Patrol enables a high level of preparedness for environmental as well as search and rescue operations at sea.

The airport is run on a strict commercial basis which makes it unique in Sweden. The French company Vinci Airports owns 90,1 per cent of the shares. The municipality of Nyköping owns the remaining 9,9 per cent.